The content of this blog has been migrated from one platform to another several times now. Back in the day I had an account on Blogger. It looks like it’s still there, which probably isn’t doing wonders for the SEO on this site with the copied content.

After that I started making blog posts on Software Reference, my publishing company’s site. The posts were technical things that interested me, but weren’t necessarily relevant to the topics of the books we published (i.e. they tended to be about programming rather than netiquette or Microsoft Word 2007).

Next the content moved to its own domain: matthewstrawbridge.com. Until now it’s been a Drupal site. This post is about migrating that content from a dynamic Drupal site to a static one generated using Jekyll… why I wanted to change and how I did it.

First things first, what is Drupal

Drupal is a content management system along the same lines as Joomla and WordPress.

I started using Drupal because it seemed to be the most powerful of these options: it gives you low-level control of your site without tying you into a particular way of doing things, and there is a good selection of plug-ins for further extending it.

There’s nothing inherently wrong with Drupal. It does what it sets out to do. Once you’ve got a site set up you can post new content and it takes care of the rest. If you’ve got some hosting space you can get it set up and configured fairly easily.

However, the elephant in the room is the way it handles updates.

How you actually handle updates:

That’s the abridged version. See the UPGRADE.txt file if you’ve got time to burn.

All of which means that, unless you spend your life administering Drupal websites professionally, your site is probably going to lag behind the latest version for a while until you can summon up the energy to go through the pain of updating it. I’d go as far as to guess that most Drupal websites are not up to date most of the time.

Even with resources such as Drush and Bernhard Fürst’s version patches, the whole process is orders of magnitude more painful than I’d like it to be.

The final nail in the coffin

So what is the tipping point? What has finally nudged me to abandon Drupal for good?

It’s this security advisory (which I somehow missed at the time) and its follow-up (which I almost missed too).

Basically, if you were using Drupal and hadn’t updated the software then your site was wide open to hackers and there was a good chance that it had already been compromised by a wide-scale automated attack. Why constantly fight to keep installing security patch on security patch when you can just serve it all up as static content?

So what is Jekyll?

Jekyll essentially knows about markdown and blogs, and how to turn one into the other. It’s the engine that powers Github Pages, so it’s got a good pedigree.

Once it’s installed, you can just start writing posts as markdown files. You can set Jekyll’s local server running and watching for changes and view the blog in a web browser pointed at localhost (http://localhost:4000 by default).

From there it’s just a matter of copying the static content to your server. I’m using site44 so deployment is as simple as copying it from one Dropbox folder to another and waiting for it to sync.

What else did I consider?

Octopress (http://octopress.org/) is built on top of Jekyll, so one is worthy of consideration if you’re thinking of using the other. In theory Octopress simplifies working with Jekyll by providing various templates and helper scripts. However, after reading various posts online from people switching from Octopress back to plain Jekyll – for less complexity and more control – I decided to plump for Jeckyll on its own.

If you’ve written HTML and CSS in the past then editing the HTML templates and sass/scss styles used by Jekyll is actually quite pleasant, so I’m not sure Octopress would add much apart from complexity.

SquareSpace would take away all the pain of administering you own server by providing that for you. I’ve used it before for various projects.

It is a fine option if you don’t already have hosting space that you’re paying for. If you do, then it’s just a little too expensive, especially if you don’t need more than one user to be able to post updates.

They’d do well to have an inexpensive cut-down option with very low storage and bandwidth to encourage people into their ecosystem.

Getting up and running with Jekyll on Windows

Jekyll’s really easy to use on Linux or a Mac. On Windows it’s a bit more fiddly to set up: some combinations of the various components work better than others. There are basically two ways to go: follow the excellent instructions here or download the whole lot pre-configured from PortableJekyll. I went the latter route.

Go to https://github.com/madhur/PortableJekyll and fork it.

Select a folder to clone it into. I chose the folder Software in my Dropbox. t takes quite a while to fetch the content, so go off and do something else while you’re waiting. You end up with a PortableJekyll folder beneath the folder you selected. (You could just download the latest snapshot from GitHub and unpack it onto disk without the repository, but doing it via Git should make updating to future versions slightly easier.)

In a console, change to the parent folder of where you want to create your site.

Run the setpath.cmd file from the folder you saved Portable Jekyll into:

This adds the components of Portable Jekyll to the path.

Now use the jekyll new command to construct an empty Jekyll project:

This creates various files and folders to form a very simple website.

Now is a good opportunity to add the empty site as a baseline to Git:

Jekyll ships with a couple of syntax highlighters:

I had issues getting Pygments to run so I added the following to my site’s _config.yml file to switch it to use Rouge:

Building and viewing the site

Now we can try building the new empty site.

If you don’t get any red text output to the console then it has probably worked.

So we can now try the site:

(You might need to allow the Windows firewall to let Ruby do its thing, if you get asked.)

It looks like you need to use the --force_polling option on Windows. Without this, once watch was triggered by a change, it tried to regenerate the whole site once per second even when there were no further changes! But with this option it sits there quite happily, only springing into action when a genuine change has been made.

This starts a local webserver and watches your project for changes. To see the site, just go to http://localhost:4000/ in a web browser. 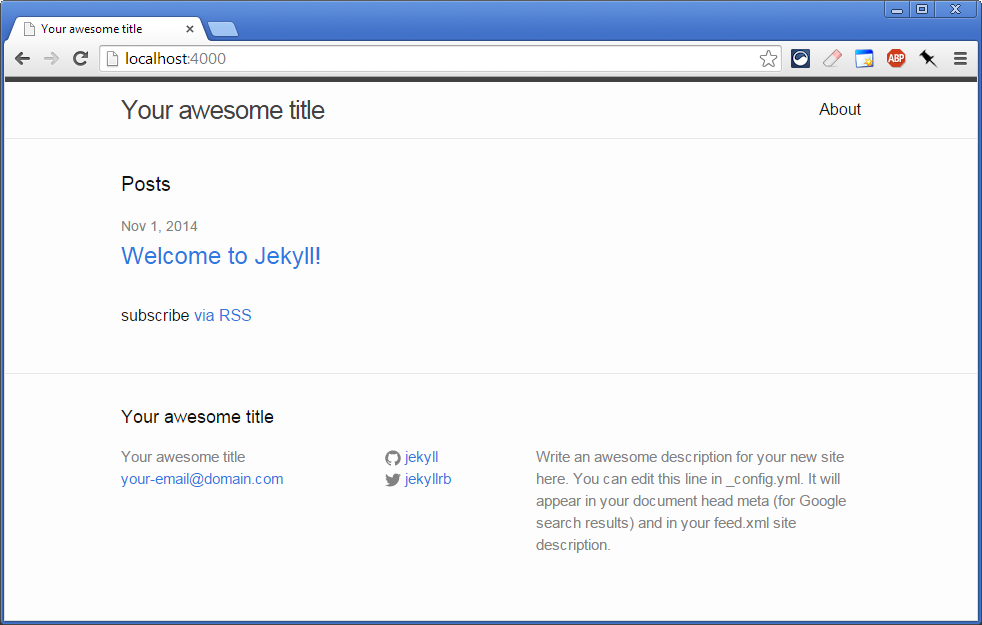 Clicking on the title of the default post which has been created for you gives you an idea of the format you can expect, as well as providing some basic instructions about what lives where: 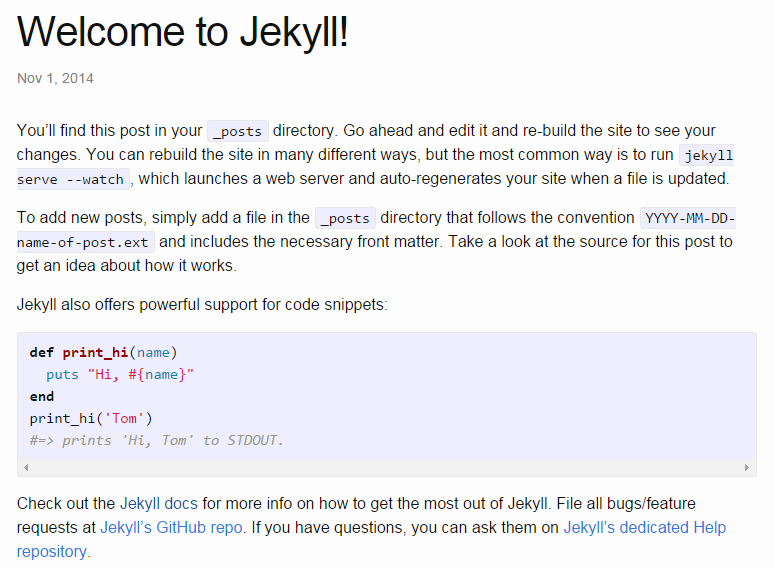 This is a good point to tweak the various settings in _config.xml to make the site feel more your own. The server will continue to run in the background so once you save the file, give it a second or two and you can reload it in your browser.

You might need to kill the Jekyll server and restart it to detect that the config file has changed.

Adding a new post is as simple as creating a new markdown (or HTML if you prefer) file in the _posts directory. If you use the default naming convention of yyyy-mm-dd-title then you don’t have to specify the post’s date and title in the metadata section at the top of the file.

You can read more about Markdown formatting here.

So that’s it. I’ve moved from a fairly heavyweight content management system to lightweight HTML. It’s just as easy to write posts in Markdown as it was to use Drupal’s editing system, and publishing new posts is simply a matter of running a script to copy the generated site from one part of my Dropbox hierarchy to another.

If you’re looking for a way to publish a blog or other content as HTML but prefer writing in Markdown then give Jekyll a try.